Langues du chat (cat tongues) are a delicate shortbread biscuit, named so because of their flat, rounded shape. As far as biscuits go, these ones are pretty special. Light, crisp and gently sweet, they are a far-cry from chunky choc cip cookies or chewy anzacs.

My inspiration to make these came from Danny on the Great British Bake Off. She made her version of langues du chat in the petit four challenge of the second last episode in the series. She flavoured hers with orange, and dipped them in cardamom-flavoured white chocolate.

I also spotted them a few weeks ago on a visit to The Cheese Shop in Nottingham – these are the imported from France version and apparently very yummy.

Danny in action on the GBBO

I decided to try and replicate her take on this French recipe, but decided to dip them in plain white chocolate instead, as I didn’t want them overpowered by the cardamom flavour. 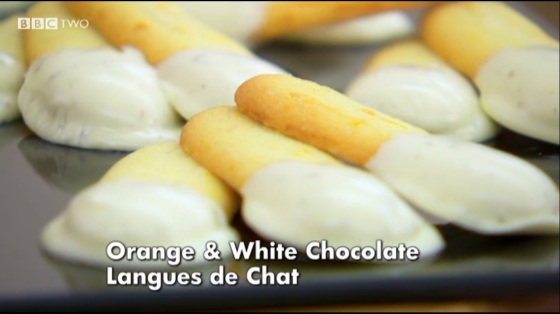 I was pretty happy with my biscuits, and they were eaten-up quickly. I remembered to take a photo just in time, but these were slightly less uniform than the best ones of the batch.

I was also accused of them being slightly man-like in appearance. I can assure you, this was not intentional! 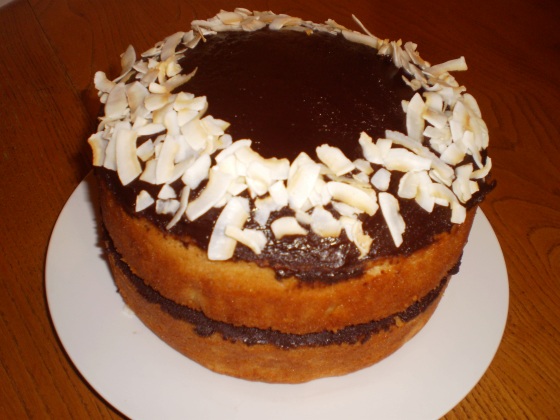 Bounty Cake, aka Taste of Paradise Cake, is a recipe I submitted to the Nottingham Post’s weekend magazine feature, ‘A nice slice’. I love bounty bars, and this cake had instant appeal to me when I saw the original recipe on this blog, by Cathryn and Sarah-Jane from the latest season of the Great British Bake Off.

Coconut sponge topped with decadent chocolate and toasted coconut sounded like a winning combination to me. After I baked it, I also delivered it to the Nottingham Post HQ in the city, and the team there seemed really grateful. I even received a wedding proposal by email as a result (I think it was a joke…).

Here is the lovely write-up they gave me, which includes the recipe. They even mentioned this blog site in there, which was very sweet of them – especially considering it is so new.

I only slightly varied from the original in that I found the icing to be a bit too solid – my fault for not putting in the full amount of milk, so I’d suggest don’t be afraid of all the milk and I’ve reduced the amount of icing sugar slightly. Also, the resulting cakes are BIG – perfect for feeding a crowd. But if you want a smaller cake, you could easily halve the amounts and just do a single layer.

In case you can’t read the recipe clearly, here it is:

For icing and decoration:

For the most recent meeting of Cake Club I made chocolate cherry cupcakes, garnished with suitably ghoulish bloody eyeballs. The recipe I used is a simple Nigella recipe, and the resulting cupcakes were delicious. A nice soft cake with a deep, dark fruity flavour from the use of cherry jam in the mix. Nigella topped her cupcakes with cherries, but I chose eyeballs (made of chocolate) instead, to fit in with the Halloween theme.

To make the eyeballs, melt the white chocolate in a bowl in the microwave. Zap it for 30 seconds at a time, stirring in between each blast, to ensure it doesn’t burn, and instead reaches a nice runny consistency.

Using two teaspoons, drop the unwrapped lindt balls into the chocolate one at a time, and roll around to cover, before scooping out gently, and placing on some greaseproof baking paper to set.

After the chocolate had hardened, I was planning on using my newly purchased (from eBay) sugar art pens in red and black to draw on the eyes.

Unfortunately the pens didn’t seem to work properly on the white chocolate surface, and dried out, meaning only two of the eyeballs were done before they stopped working.

After a few minutes of panic, I decided to instead use red and blue gel food dyes to create the eyeball effect, and they worked pretty well. I applied the dye with the end of a toothpick, drawing the red outline first, then dabbing blue in the centre.

To create some blood for oozing out of the eyeballs, I placed the raspberry jam in a strainer over a bowl, to remove the seeds. The smooth liquid that resulted, was then dropped onto each eyeball, running down the side onto the cake, to create a ‘bloody’ effect.

This is a very useful chocolate cupcake recipe to have on hand – very easy to make, and they taste delicious. You can use a similar recipe with other flavours such as orange, raspberry or apricot, using the relevant replacement jam in the mix. I think I’ll try apricot next.

Today’s recipe is for Bramley Apple and cheddar cheese scones. Apple in a scone? Yes, you heard right. Up until a few months ago, I hadn’t heard of or tried this combination before either, but it is now one of my favourite scone recipes.

The reason I came to make apple and cheese scones, is because I wanted to enter a few of the cooking categories at the WI baking competition which takes place at the Southwell Bramley Apple Festival.

The picturesque market town of Southwell in Nottinghamshire is the birthplace of the Bramley Apple, and ever year this festival in October celebrates apples through food, drink, performances and apple-inspired baking. 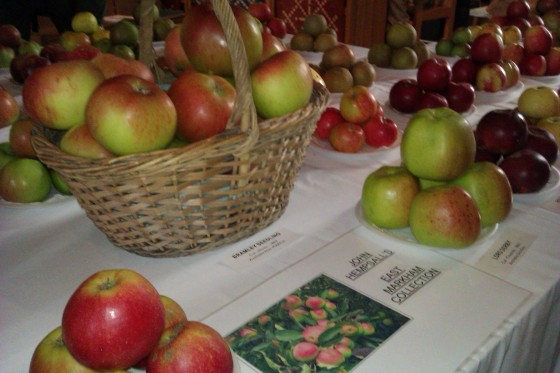 Being a member of the Nottingham City WI, I decided to enter two of the baking categories – the apple pie category, and the intriguing apple and cheese scone category.

The recipe I used is based on this one by Recharge, Refocus, Relax. I adapted it slightly – using Bramley Apple and adding more flour, baking powder, and reducing the amount of cheese.

I heart Southwell (and apples)

I tried the recipe a few times before the big day, and baked the scones fresh first thing on the morning of the festival. I was thrilled to receive first prize in the apple and cheese scone category, and wore my red rosette with pride. It was a really fun experience, and I plan on entering more baking competitions in future, as a chance to try and improve my skills and try new things.

Now, for the winning recipe. I hope you enjoy these easy and tasty scones as much as I do.

The beauty of these scones is they aren’t dry like cheese scones can sometimes be. In fact, you don’t even need butter with them, they are great just on their own.

Thoughts, musings and adventures of an Australian lady living in Nottingham, England.